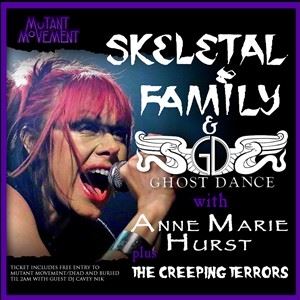 This event is for 18 and over - No refunds will be issued for under 18s.

Note: Your ticket includes free entry into Mutant Movement/Dead And Buried with guest DJ Cavey Nik, which follows this event until 2am.

Anne Marie Hurst was the lead vocalist of Elements until 1982. In December 1982, she helped form Skeletal Family. After departing from Skeletal Family in 1985, she co-founded Ghost Dance with Gary Marx (formerly of The Sisters of Mercy) in 1985.

After an absence of more than 20 years, she returned to the music scene in 2009 and released a new album called Day of All Days as Anne Marie Hurst in 2011 featuring former Skeletal Family members Trotwood and Greenwood. The band then rebranded as The Skeletal family and performed regularly throughout Europe, USA and South America with various line ups until 2018.

Due to numerous requests from fans worldwide for Anne Marie to perform songs from both Skeletal Family and Ghost dance, Anne Marie has decided to put together a band to satisfy this demand and is proud to present her brand new show.